GOES-14 has been out of storage mode and operating in Super Rapid Scan Operations for GOES-R (SRSOR) mode since August 10, providing 1-min imagery. As with past SRSOR data collection periods, the 1-min imagery is available for display in the SPC operational NAWIPS data visualization system. SPC forecasters have been utilizing the imagery in operations when available over relevant areas.

Today (8/18/15) the imagery was especially valuable as GOES-15 (West) underwent a scheduled maneuver, causing a data outage between 1630 and 1759 UTC. More significant to SPC was that GOES-East, to cover for the West outage, operated in Full Disk mode, collecting images only every half hour from 1615 and 1815. This was at a time when convection began to fire ahead and along a cold front passing through an SPC slight risk area across the central US.

The 1-min satellite imagery aided in 2 watch decisions during the early afternoon hours: a severe thunderstorm watch issued at 1815Z over parts of MO/IL, and a tornado watch issued at 1830Z over parts of WI/IA/IL. Cu developing in the clear sky ahead of the front in east-central MO clearly became agitated as a gravity wave feature traversed eastward through 1715Z. Over the next hour, cu quickly evolved into towering cu before eventual initiation took place. Additional development was analyzed further to the north under high clouds near the IA/IL border. Even further north in NE Iowa, strengthening of convection could be seen as bubbling/texture came through a more opaque/smooth cloud shield. Forecasters have commented that the very high temporal restitution satellite imagery allows for easier/more accurate tracking of individual cloud features/structure, especially when partially obscured by upper-level clouds. Evolution of individual features becomes disconnected with longer time between scans,  making it difficult to interpret important trend information.

The first animation below shows the 1-min imagery in the time period leading up to and just after initiation during which GOES-East was in Full Disk operations. The second animation shows GOES-East imagery during the same period. SPC watches appear on both. Click animations to enlarge.

GOES-14 has come out of storage and will be providing  Super Rapid Scan Operations for GOES-R (SRSOR) 1-min data for the next 2 weeks. Forecasters at SPC have found operational value in this imagery in the past (see previous blog posts), and are once again taking advantage of its availability. Feedback from SPC forecasters is been helpful in assessing the operational utility of 1-min satellite imagery,  a capability of the GOES-R Advanced Baseline Imager (ABI) that will be routinely available.  For more information, including links to the real-time 1-min imagery and past examples, please visit: http://cimss.ssec.wisc.edu/goes/srsor2014/GOES-14_SRSOR.html.

Another example of GOES-14 Super Rapid Scan Operations for GOES-R (SRSOR) 1-minute imagery being utilized in the SPC forecast process comes from May 23 afternoon convection over the Carolinas. A SPC slight risk for severe weather existed along the Carolina coasts, with large hail and damaging winds posing the greatest threat. By 20Z, two SPC severe thunderstorm watches had already been issued for the Carolinas, anticipating severe weather development in the coming hours. The 1-minute imagery was being looked at closely for convective initiation, with a SPC watch update mesoscale discussion issued at 2014Z (Fig. 1). In the text, the forecaster mentions, “1-MIN RESOLUTION VISIBLE SATELLITE IMAGERY AND LIGHTNING STRIKES INDICATE INCIPIENT TSTM DEVELOPMENT OVER MARION/FLORENCE COUNTIES OF SC. ADDITIONAL CLUMPING OF CU HAS BEEN NOTED INTO PARTS OF SERN NC.”

Figure 2 shows GOES-14 1-minute imagery from 1902Z to 2130Z. Notice the significant clumping of cu, as noted in the MD, that occurred between 1900 and 2000Z in northeast South Carolina and eastern North Carolina. Between 2000 and 2130Z, convection initiated out of these two areas, as is seen in the 1-minute imagery.

Severe hail was reported with the convection in South Carolina (Fig. 3).

“The one-minute imagery helped me to anticipate areas of new convective development as well, which was useful in developing short-term forecasts and mesoscale discussions for severe weather. ”

“… having the data available routinely would very likely, over time, allow forecasters to gain a better understanding of processes related to convective initiation, as these processes occurring within a cu field would be visually revealed in high temporal -resolution data in a way that 15- or 30-minute imagery cannot as clearly depict.”

“In the pre-storm environment, these data were especially helpful in monitoring the vertical growth of cumulus convection and in the identification of boundaries.”

“I found it to be very useful in… Using cloud character  and trends to diagnose boundary locations and motion, and nowcast their potential for either CI or influences on upshear storms to interact therewith.”

Another example of the utilization of GOES-14 Super Rapid Scan Operations for GOES-R (SRSOR) 1-minute imagery in an Storm Prediction Center (SPC) forecaster’s decision-making process came during the early to mid afternoon hours of May 22, 2014. Severe weather was expected to develop from New York south into eastern Virginia where strong heating and destabilization were expected to occur in the presence of decent deep layer shear. SPC forecasters were interrogating the 1-minute imagery around the Pennsylvania/New York border already by 1549Z, when a Mesoscale Discussion (MD) was issued (Fig. 1). The forecaster mentions in the text that “1-MIN RESOLUTION VISIBLE SATELLITE IMAGERY DEPICTS DEEPENING CU AND SMALL CBS FORMING ALONG/JUST AHEAD OF A COLD FRONT STRETCHING FROM AROUND 25 S ROC TO ZZV.”

A severe thunderstorm watch was issued for much of eastern New York and eastern Pennsylvania at 1640Z anticipating the development of severe convection out of the growing cu field. At 1719 UTC, a watch update MD was issued for the watch area (Fig. 2), noting: “AREAS OF CLUMPING CU EVIDENT IN 1-MIN RESOLUTION VISIBLE IMAGERY FROM S-CNTTRL PA TO CNTRL VA SHOULD EVOLVE INTO ISOLATED TO SCATTERED STORMS BY 19-20Z.”

Figure 3 shows a 3 hour animation of the 1-min visible imagery in the region of concern. Note the deepening cu field and eventual clumping of cu across northern PA into southern New York between 15 and 17Z as mentioned in the two MD’s, followed by the eventual growth of robust convection between 17 and 18Z.

Convection would continue to grow upscale out of this cu field, primarily producing widespread severe hail across the region, with the first report coming in at 1722Z (Fig. 4). 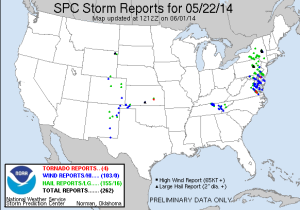 A SPC forecaster commented on the use of the 1-min imagery in operations during this event: “This has provided extra confidence and lead time for the issuance of two mesoscale discussions compared to the normal satellite update frequency/latency. With weakly forced, nebulous low-level boundaries over the Northeast today, the ability to see where boundary layer cumulus is deepening and clumping in this manner is quite striking. It’s analogous to the difference between watching high-def TVs vs. standard def, especially noticeable when switching back and forth to the normal GOES imagery.”

The forecaster went on to mention that “Satellite imagery at 1-min temporal resolution needs to become the new standard for severe weather operations.”

GOES-14 provided the Storm Prediction Center (SPC) with 1-minute Super Rapid Scan Operations for GOES-R (SRSOR) imagery May 8-25. This gave SPC forecasters an opportunity to use and comment on a capability that will be available with the next generation geostationary satellite system, GOES-R. The GOES-R Advanced Baseline Imager (ABI) will be capable of scanning one 1000×1000 km sector every 30 seconds, or two sectors every one minute. For more 1-minute imagery information and examples, please visit the following page:  http://cimss.ssec.wisc.edu/goes/srsor2014/GOES-14_SRSOR.html

The forecasters at SPC who had the opportunity really valued viewing this high temporal resolution imagery, and were sorry to see it go. Adding to the benefits of this imagery is the fact that the latency of each image is typically 2-4 minutes after the time stamp, something the forecasters value greatly. It seemed as though every day when I would peak into operations, at least one forecaster would have the 1-minute imagery looping on a workstation. I gathered informative, detailed feedback from SPC forecasters regarding features and processes they are able to see in this imagery that are otherwise not evident or more difficult to discern in regular 5-30 minute imagery.

One example of an SPC forecaster using the 1-minute visible imagery in his forecast decision-making came during the early evening hours of May 21. Convection was already ongoing across the western third of Texas by  2200 UTC. However, one of the mesoscale forecasters observed newly developing convection in the Texas panhandle as well as in SW Texas via the rapid updating, 1-minute imagery.This indicated to him that the severe threat would continue over the next couple of hours. The observation was noted in SPC MCD #0647: GOES 14 ONE-MINUTE IMAGERY SHOWS CONTINUED UPDRAFT GENERATION WITHIN A MORE MATURE CLUSTER JUST E OF AMA…AND ADDITIONAL TSTM DEVELOPMENT W OF MAF…SUGGESTIVE OF A CONTINUED SVR HAIL/WIND THREAT FOR AT LEAST THE NEXT 1-2 HRS.

Below is a loop of the 1-minute visible imagery over the region for the hour before this MCD was written (Fig 1), as well as the MCD graphic (Fig 2).

SPC forecasters have found the 1-min imagery to be quite useful when monitoring mature convective evolution, as is seen in the forecaster comments below:

“Post-storm initiation, the high-resolution data allowed for careful analysis of overshooting and collapsing tops, the character of the storm anvils (ie. health of the storm) and the identification of convectively generated outflows.”

“I found it very useful in… Assessing the trends of convection via evolution of cloud character in the storms themselves (overshooting tops, subjective visual assessment of storm-top divergence and flanking-line development, etc.)”