The storms that ravaged the southern United States this past week not only produced deadly severe weather, but also incredible flooding. Figure 1 shows parts of the Florida Panhandle and southern Alabama received in excess of 10 inches of rain on Tuesday, April 29 alone! 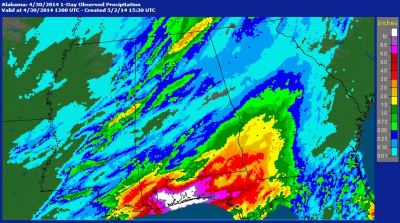 The animation in Figure 2 shows GOES-East IR imagery with overshooting top detection’s overlaid from the afternoon of the April 29 into the early morning hours of the April 30. During much of this period, GOES-East was in Rapid Scan Mode, meaning images were often available every 5-10 minutes (instead of 15). Notice the persistence of overshooting tops centered over the Mobile area throughout the period, where copious amounts of rainfall were recorded. By about 09Z, a downward trend in overshooting top detection’s had begun as the storm system shifted eastward and weakened. The Overshooting Top Detection product provides a day/night capability for forecasters to easily identify where within a convective system the strongest updrafts are occurring, and where severe weather and/or heavy rainfall may be occurring given other meteorological factors.

Figure 3 shows this same system during the early morning hours of April 30 at much higher resolution. This is a 375 m IR image taken with the Suomi NPP VIIRS instrument. Notice the visibility of features that aren’t easily seen in current GOES IR imagery such as gravity waves and overshooting tops.