Water vapor imagery is used to diagnose various synoptic scale features, some of which include the longwave trough/ridge pattern, shortwaves, moisture patterns, and upper jets. On 27 April, 2017, a strong northwest to southeast oriented jet was pushing into the southwest US, bringing unsettled weather to the region. Figure 1 is a depiction of the 300 mb jet from the GFS model, and figure 2 is a cross section through that jet. The tropopause (high static stability, PV>1.5) is higher in the atmosphere southwest of the jet (sub-tropical airmass) compared to northeast of the jet (polar airmass). Further, a tropopause fold (PV>1.5 pulled downward poleward of jet) is apparent in the vicinity of the jet core, indicating dry, stratospheric air is being pulled down in the atmosphere poleward of the jet.

The upper level jet feature is obvious in GOES-16 water vapor imagery (figure 3) from SW Oregon to NW New Mexico. The jet is evidenced in the imagery by a sharp transition from cooler temperatures (moist, sub-tropical airmass) and fast moving upper level clouds on the southwest side to warmer temperatures (dry, polar airmass) and no upper level clouds on the northeast side.  The enhanced drying immediately poleward of the jet is indicative of the dry, stratospheric air being pulled downward within the tropopause fold. Such a dramatic transition is commonly associated with strong upper-level jets and tropopause folds, and confirms the cross section analysis in the previous paragraph. By diagnosing upper-level jets in water vapor imagery, one can gauge current model run accuracy with respect to jet placement and timing. 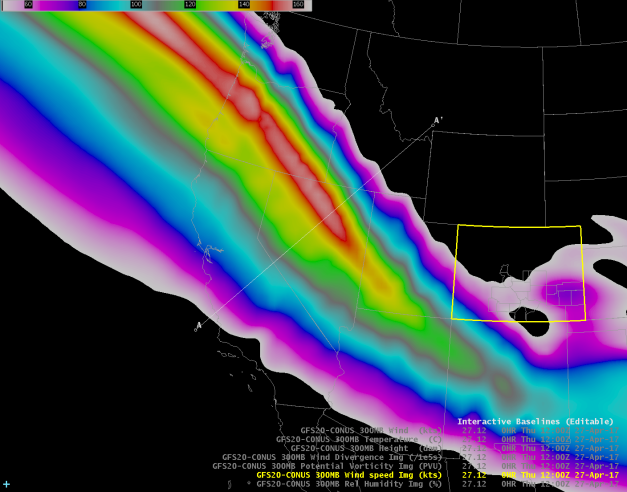