An Active Week for GOES-14 SRSOR!

Thanks to NESDIS and the GOES-R Proving Ground, GOES-14 has been made available for super rapid scan operations for GOES-R (SRSOR) since February 1, 2016 and will run through February 25, 2016.  This is allowing the Ocean Prediction Center (OPC), Weather Prediction Center (WPC), Tropical Analysis and Forecast Branch (TAFB) from the National Hurricane Center, and the NESDIS Satellite Analysis Branch (SAB) the opportunity to look at cool season convection, nor’easters (when they cooperate), along with interesting lake effect or mesoscale features.  For this blog post, I’m going to focus on a few events that have affected the OPC during this past week.

From February 7-9, 2016, a very strong storm formed off the southeast U.S. coast from a shortwave trough that split from the northern stream, dove southeast towards the Gulf Coast, then initiated a surface low pressure early on February 7th.  This low rapidly intensified and was producing hurricane-force winds near the Royal Caribbean’s Anthem of the Seas by 0300 UTC on February 8th. 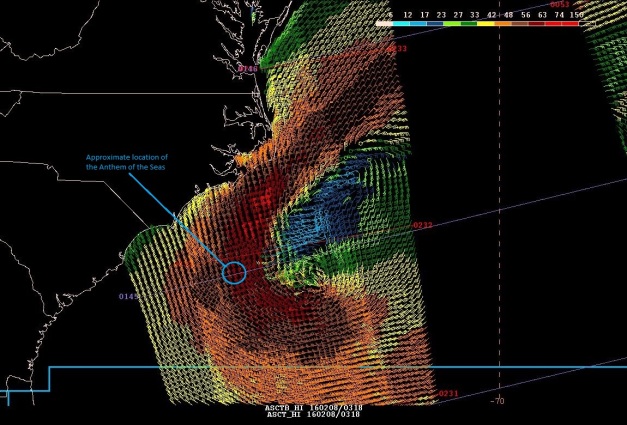 ASCAT A & B showing winds of storm to hurricane force near the location of the Anthem of the Seas cruise ship at 0318 UTC on 02/08/16. 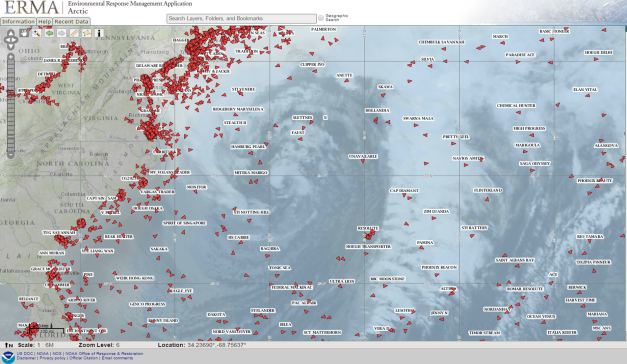 Here’s an ERMA image showing the locations of ships that were in the vicinity of the powerful hurricane-force storm off the East Coast on 02/08/16.

GOES-14 Visible SRSOR showing the evolution of the hurricane-force storm on 02/07/16.

GOES-14 Infrared SRSOR showing the evolution of the hurricane-force storm on 02/07/16.

Corrected:  Here’s a 3-panel GOES-14 animation showing the differences among 15-min, 5-min, and 1-min imagery when looking at this impressive storm. A special thank you to Scott Lindstrom (CIMSS) for putting this animation together. See the CIMSS Satellite Blog linked below for more animations.

For more on this storm, please see the following links:

Another storm-force to hurricane-force low formed on the heels of the powerful ocean storm due to the anomalously strong upper trough on 02/09/16 and one of the OPC forecasters mentioned using the GOES-14 SRSOR for his analysis:

“HOWEVER THIS MORNINGS PASSES MISSED OUTER NT2 WATERS WHERE HIGHEST WINDS ASSOCIATED WITH DEVELOPING LOW WERE OCCURRING. BOTH THE 12Z GFS AND 12Z ECMWF ARE INITIALIZING TWO SURFACE LOWS OVER SOUTHEASTERN EDGE OF OUTER ZONES ANZ920 AND ANZ910. BASED ON THE ESTIMATED LOW POSITIONS FROM THE GOES 1 MIN SUPER RAPID SCAN IMAGERY TODAY…IT APPEARS THAT THE 12Z ECMWF HAS A BETTER 18Z POSITION AT LEAST WITH SECOND CENTER INVOF 37N70W AT 18Z. 12Z GFS IS ABOUT 1 TO 2 DEGREES NE OF ECMWF POSITION.” ~Clark

GOES-14 Visible SRSOR animation showing the evolution of a new storm to hurricane-force low off the Mid-Atlantic on 02/09/16.

For a longer animation including 2-min lightning density from the GLD-360 network (special thank you to James Kells, OPC), click here.

Strong thunderstorms in the OPC southern Offshore Zones on 02/12/16:

As a clipper storm strengthens near the North Carolina coast today, 02/12/16, strong thunderstorms have erupted near and east of the Gulf Stream.

This latest storm is progged to become a hurricane-force low as it moves to a position just southeast of Nova Scotia in the next 24 hours.  It has surely been an impressive week for storms along and off the East Coast!