As I’m sure many of you are aware, a meteor entered Earth’s atmosphere early this morning in southern Russia which has led to ~1000 injuries and widespread window and building damage due to the shockwave. This shockwave was caused by the meteor exploding upon entering the Earth’s lower atmosphere due to intense friction and the high velocity of the meteor. A couple of the RGB products that we use in the GOES-R Proving Ground captured this event near the northeast limb of the Meteosat-10 satellite.

The SEVIRI RGB Air Mass product captured the meteor explosion in the 0315 UTC image (highlighted with the white circle). Notice the streak over southern Russia as a whitish line. This color is usually seen when there is arctic air, for instance over Greenland. This would suggest that as hot as the explosion was, the smoke and any condensed moisture was very cold at a high altitude. An animation is provided in the second image, just click on the image.

The SEVIRI RGB Dust product also captured this meteor impact, but the signal was different due to the difference in infrared bands that are used to create the product. In this first image, the white circle highlights the meteor streak as a red line. This is because the signal was cold, similar to strong thunderstorms (cumulonimbus clouds) or ice clouds. The animation below this shows how the streak signal last longer in this product than in the Air Mass product.

This shows us an unusual and different approach to using RGB products in a non-meteorological setting. Thanks for reading!

The latter half of January featured a stormy North Atlantic with a number of cyclones that produced hurricane force winds. An animation of RGB air mass imagery (below) from January 18-26 shows the active pattern. The most impressive storm rapidly developed and the central pressure lowered to 930 mb approximately 1200 UTC January 26th, see surface map below. Considering the strength of the storm, the OPC 96-hour forecast was exceptionally accurate. The GFS and European models were forecasting winds greater than 80 knots (90 mph) and wave heights over 55 feet. The ASCAT passes largely missed the strongest winds (highest observed were 60 knots (70 mph), but there were reports of waves near the Portugal coast between 90 and 100 feet, nearshore! On the RGB Air Mass imagery animation, you can see the red and orange shaded colors drawn into the center of the cyclone. This area represents warm, dry stratospheric air associated with high potential vorticity near a jet streak. As this stratospheric air is drawn into the storm it can be transported downward to produce high winds at the surface. 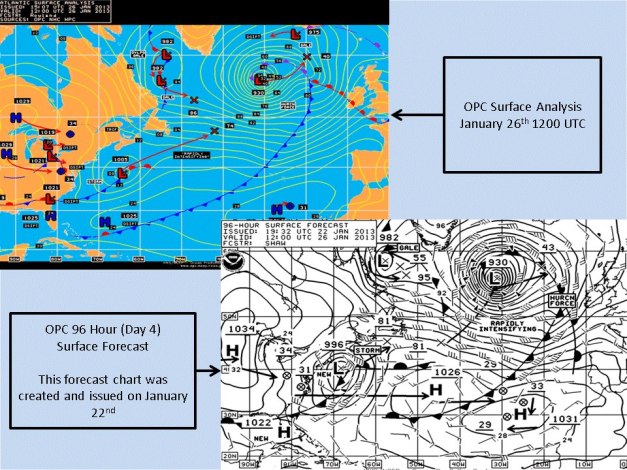 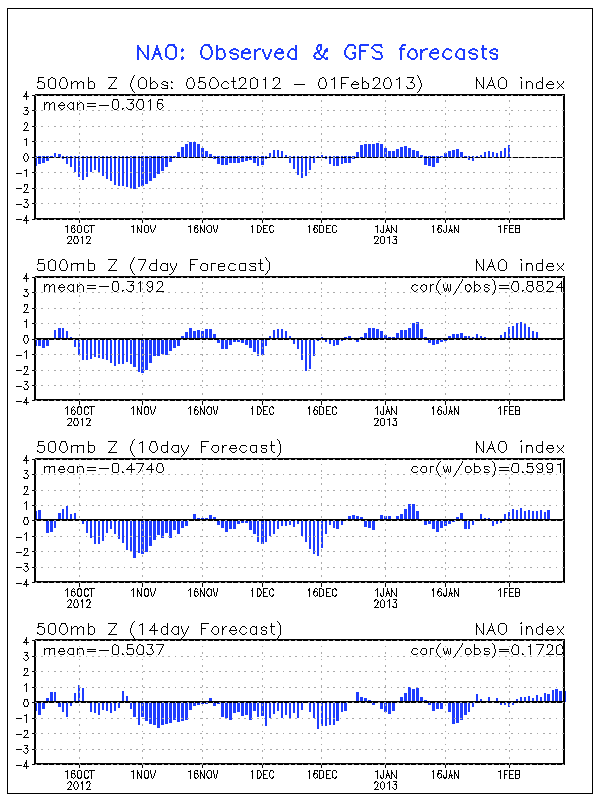 A special thank you to Dr. Emily Berndt (post-doc at NASA SPoRT) for providing much of the material for this post and to the OPC Facebook team for the surface comparison image.