What to do with Sandy, Pt. II?

As I write this, the NOAA Center for Weather and Climate Prediction is buzzing with activity as everyone prepares forecasts for what may become a significant East Coast storm. The players are on the field (meteorologically speaking) and now it’s a matter of when the atmospheric dance begins. Hurricane Sandy made landfall in Jamaica and eastern Cuba last night, but appears to have used those landmasses as a speed bump with the current intensity still at 105 mph with a central pressure of 963 mb. The storm has accelerated some today, but is expected to slow and turn slightly northwest overnight into tomorrow as an upper-low to the south interacts with it. 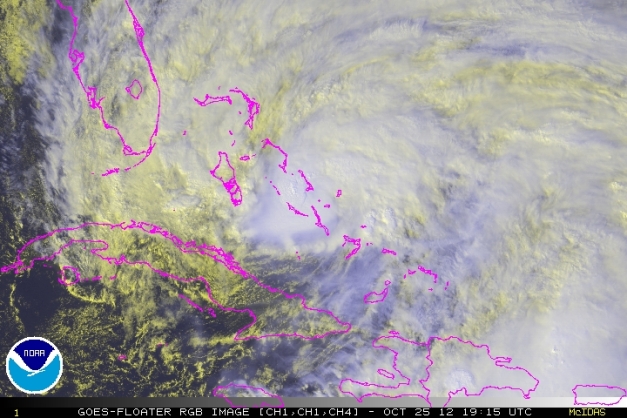 The satellite image above shows a compact hurricane with a cloud-filled eye-like structure this afternoon. Notice how expansive the cloud shield is to the west through north! That is a sign of strong upper-level diffluence (air escaping away from the storm to allow for ventilation), which may help Sandy maintain its strength for a while longer before big changes occur to the overall structure. Some of these changes are already evident in the overall deteriorated organization.

GOES-Sounder RGB Air Mass product overlaid with the 11 am EDT (15z) National Hurricane Center forecast track for Hurricane Sandy. The red circle highlights the trough that could lead to a big EC storm. The black circle is evidence of baroclinic (Mid-Latitude) interaction with Sandy.

The GOES-Sounder RGB Air Mass product above paints an interesting picture today. The red circle highlights the trough that will play a significant role in Sandy’s evolution over the coming days. The red “L” is a vigorous shortwave that is digging into the mean trough and will help to keep pushing the entire red area east. The red-coloring in the image is stratospheric air (dry, lots of ozone) with the blue colors indicating much cooler mid-level temperatures, while the green color shows warmer mid-level temperatures (on average). Sandy is still off the screen in the lower right, but the outflow (fanning of high clouds) can be seen well to its north. The black circle highlights some orange shading that signifies the beginning of some interaction with an upper-level low pressure to Sandy’s southwest. This would suggest that some transition to a hybrid may be starting.

Meanwhile, farther east over the open Atlantic. . .there are many features that will play some role in our East Coast storm’s evolution. Although models have come into better agreement on a high impact event in the Mid-Atlantic/New England, how these features interact will make all the difference.

The feature circled in red is a relatively deep upper-level low that has cutoff from the main jetstream and will be shifting southeast over the next few days. This may act to capture now post-tropical storm Tony (black circle) which will add some energy to an already deep system. (Note: The color shadings are the same as described above with red-coloring indicating stratospheric air and high potential vorticity or spin, blue is cooler mid-level temperatures, and green is warmer mid-level temperatures.) As this occurs, the expanding upper-level ridge of high pressure (blue circle) will continue to retrograde west as a large blocky pattern develops. This means the atmosphere will literally form a gigantic traffic jam (probably worse than what I experience in DC every day). In turn, this could force Sandy in whatever form north-northwest towards the Mid-Atlantic early next week.

A fun fact. . .the red “L” is a small vorticity maxima or upper-level low that will be bounced west for days under the blocking upper-level ridge. Some models have this ending its long trip in Hudson Bay, Canada after starting yesterday in Ireland. Now that’s a blocked pattern!

The weather in the Mid-Atlantic may be deteriorating early next week with high winds, heavy rain, possibly some mountain snow, and most important, the potential for significant coastal flooding. Remember, this storm will coincide with a full moon, a large easterly fetch, and of course, the storm surge with Sandy.

I will do my best to keep updating this blog each day with new imagery and an update on the various systems that will determine our weather on the East Coast into next week.